“FINALLY! After several production problems this is finally ready to go, and it’s worth the wait!
Kilslug are one of my favourite bands, and it’s an absolute major honour to release their music on my wee label. This track has the characteristics of their sound – brilliant, twisted dirge punk with the best vocal delivery ever – but has a really punchy production and driving, meaty sound. It’s a perfect follow-up to their long-awaited second album and not just an aimless re-hash of their 80s sound, but retains exactly that which was ace about them in the first place – ie EXACTLY what you want from a band coming back after years out of the game!
Drunk In Hell have been going for ages now but this is their first proper release….and what a side it is! I won’t go through the list of previous bands (they are many and they’re mostly fuckin ace!) cos DiH stand alone as a powerful force to be reckoned with. This is some of the most savage, heavy, grotty dirge-sludge-punk ever put to tape. It’s an absolute war of feedback and does not relent in its 6 minute run-time. Once the needle drops there is nowhere to hide. Perfect brutality”. – At War With False Noise 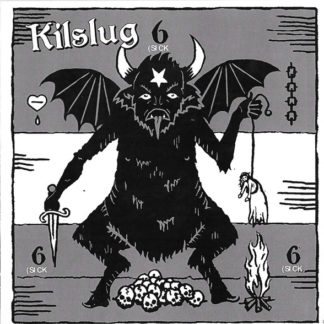