Ultimate edition of all the early demos from one of the most influential bands in death metal.

Disc 1 : Contains the original mix of “Demo # 1 – 1990 ” featuring Will Rahmer from Mortician on vocals and a live soundboard recording with Will on vocals, which was recorded in Buffalo,NY, in late 1990. This CD also features the 1st live recording with members of Profanatica from early 1990. Also included is the 1st rehearsal demo of Incantation with Paul Ledney on vocals in its uncut format.
CD contains 14 Tracks.

Disc 2 : Contains an unreleased 2 song demo from 1990 with Craig Pillard on vocals and a live soundboard from New Jersey. as well as previously unreleased pre- “Onward to Golgotha” line up rehearsals from early 1991.
CD contains 17 tracks.

This amazing double CD is the most comprehensive early demo discography ever released, by the worlds most brutal grinding death metal band! Recordings culled from original 1st generation cassettes held over 25 years and unreleased until now…

Compiled with unseen photographs of the 1st (and only) show with the early line up with the guys of Profanatica. Also included is a massive archive of the earliest show flyers, early logos sketches, and band photos of Incantation never seen by the public…till now…
Over 30 tracks in all.

Unleashed The Blood Of The Goat! 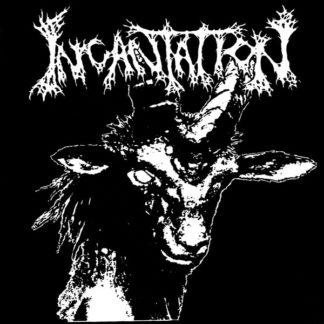