Flooded Church Of Asmodeus ‎– “Piss Soaked Church Of The Wrong: A Total Holocaust Of Those Who Turn The Other Cheek” CD

It´s time to hail the black noise again! A long waited second album of cruel blasphemy, brutal distortion and complete destruction. Since the last album, the band has sacrificed an ex-member in a holocaust ritual to eliminate all weakness, initiated a new graveyard raider, broken bodyparts, flooded ritual chambers in blood and taken over the command of the world´s most haunted ghostship. Still influenced by the likes of Gonkulator and Black Mass of Absu, the sound is like it was before, just more powerful and sick. There are only six …six …six tracks on this 48 minute album, longest of the doomy ones is over 19 minutes and shortest blast of ultra black grind is under one minute. Must be the strongest FCOA release so far, some things can surely grow underground and without any light! Eyeball licking yellow & black artwork. Release 14th of October 2016. 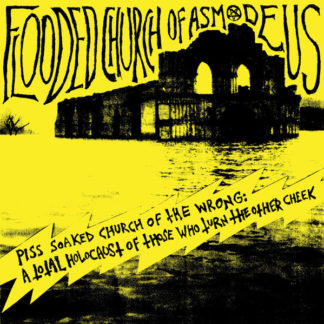 You're viewing: Flooded Church Of Asmodeus ‎– “Piss Soaked Church Of The Wrong: A Total Holocaust Of Those Who Turn The Other Cheek” CD £11.99
Add to basket